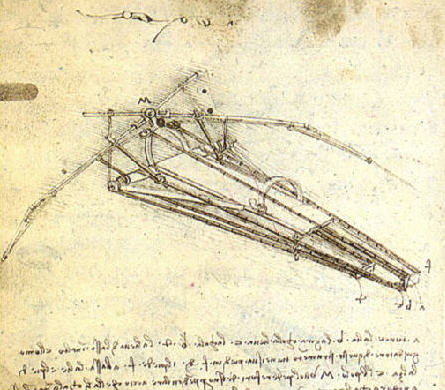 A field outside Florence, Italy. A large wood, rope and canvas contraption, vaguely dragonfly-ish in shape, lies in the middle of the field. Leonardo da Vinci, in britches and loose white shirt, is lying beneath one of the contraption’s wings, testing a set of ropes and pullies. Michael Kevin O’Leary (CEO of Ryanair, but before his Ryanair days) enters, dressed in blue jeans, sneakers and a Manchester City t-shirt.

O’Leary: Leo, you big gobshite! I can call you Leo, right?

da Vinci: (standing up and brushing off his hands) Well, I’d –

O’Leary: Great. Great. So this is what you’ve brought me all this way to see, huh? It’s the, um…

da Vinci: Flying machine. I’m thinking to call it an Aeromotive Translocator, or possibly a –

O’Leary: (knocks sharply on the wooden nose of the contraption) Sure. OK. But the name’s the least of your problems.

da Vinci: What do you mean?

O’Leary: Look, you might be a Renaissance genius and all, but this just won’t fly.

da Vinci: You think I should have used more of an aerofoil shape here to generate lift?

da Vinci: I’ve tried to keep the weight low, as far as I could, but you are worried that we won’t be able to generate enough thrust to –

da Vinci: I know that the shape could be smoother, the curves a little, um, curvier. Knock a few of the edges off and it will definitely be –

O’Leary: (sharply) Leo. That’s not what I mean. I don’t mean this thing won’t fly. I mean it won’t fly. Your whole business model. It won’t work.

O’Leary: Right. What have you got back here?

da Vinci: In the rear? It’s just space. For stability, this section before the tail has to be –

O’Leary: Sure. But empty space? How many passengers do you think you could squeeze in there?

da Vinci: I don’t know what you mean.

O’Leary: Put in at least three rows of seats, minimise the legroom – I mean, it’s not like you Renaissance wops take up a lot of space. Leave some standing room at the back with straps to hold on to.

O’Leary: Sure, standing room. Discount fares to increase passenger volume; on a shorthaul flight, who cares? OK, CAS cares, but don’t get me started on the gobshites at Civil Aviation Safety. If it’s good enough for buses, it’s good enough for – uh – aeromotive translocators. As long as people hold on during takeoff and landing, you’ve got no problem. As if sitting down with a lapbelt on is going to do you any good anyway if you’re falling out of the sky from 30,000 feet.

da Vinci: I don’t expect to get quite that high on the first test.

O’Leary: Well, from thirty feet. Whatever. The point is, jam in some seats, hang some straps and you’ve got twenty paying passengers right there.

da Vinci: I suppose I could –

O’Leary: Damn right you could. Store a few bottles of chianti or amaro along the side to charge at – (performs a quick mental calculation) – say, ten florins to the gill and you’ve got yourself a nice little earner. Now where are you thinking of flying this thing? Ideal route?

O’Leary: Paris, sure. But out of where?

da Vinci: Out of – I don’t understand.

da Vinci: Well, I plan to fly from here. From Florence.

O’Leary: No good. Fly out of one big airport and right into another and you’re dancing to their tune. Passenger security charges, terminal use charge, tower charge, air corridor charges, landing fee, noise levy, the works. But say you fly out of Vinci and into Goussainville, little pisspoor excuses for towns that nobody’s even heard of, and those airports will be paying you for the privilege. You’re bringing passengers to them. Make a deal with the hotels, the local wagoneers, and you’ve got yourself a nice little earner. Taxiing people to and from the – ah – Aeromotive Translocator.

da Vinci: I see how that could work.

O’Leary: In fact, get yourself some taxi plates for your horse. Or gondola. Whatever. Not to do the work yourself, mind. Just so you can use the transit lanes and waterways and that. Get around town quicker. Worked a treat for me in Dublin.

1 March 1901 – Formation of the Australian Army